The Free Planets Alliance’s invasion of the Galactic Empire has failed after supply mismanagement led to heavy losses. Unwilling to abort the expedition despite being greatly outnumbered, Fleet Admiral Lazar Lobos orders the remaining Alliance fleets to gather in the Amritsar Starzone for a final stand against the incoming counterattack. Strategic genius Fleet Admiral Reinhard von Lohengramm leads the Imperial forces into this decisive battle with an overwhelming advantage. However, his rival, tactical magician Vice Admiral Yang Wen-li of the Alliance, once again makes up for the incompetence of his superiors and stages a narrow escape for himself and his fellow soldiers. Though both Reinhard and Yang are displeased with the outcome—the former for his imperfect victory and the latter for the tremendous casualties—their attention must turn to the bubbling political unrest on both sides of the galaxy. [Written by MAL Rewrite]

Now with the Free Planets Alliance thoroughly occupied with their own internal matters, the forces of the Galactic Empire can safely suppress the newly formed Lippstadt League led by Duke Otto von Braunschweig. However, with his friend and loyal subordinate High Admiral Siegfried Kircheis fighting far away in the noble-controlled frontier regions, Reinhard increasingly relies on the advice of the ruthless Vice Admiral Paul von Oberstein, whose influence within the esteemed Lohengramm admiralty steadily grows.

Though bloodshed is inevitable on both sides of the galaxy, Yang Wen-li of the Alliance and Reinhard von Lohengramm of the Empire each ask themselves the same questions: how will history look back on their actions? Will the ends justify the means?

At the behest of Admiral Yang Wen-li, defected intelligence officer Commander Baghdash makes an emergency broadcast announcing that the National Salvation Military Council staged a coup under the direction of the Galactic Empire. Despite the lack of physical evidence, this debilitating declaration inspires former Rear Admiral Andrew Lynch to reveal his own role in sowing discord within the Free Planets Alliance. A fatal shootout between Lynch and Admiral Dwight Greenhill acts as the final death knell to the short-lived period of martial rule.

Within the Galactic Empire, footage of Duke Otto von Braunschweig’s nuclear bombing of Westerland results in the dissolution of the Lippstadt League. Marquis Reinhard von Lohengramm’s decision to allow the massacre for personal gain creates a rift between him and High Admiral Siegfried Kircheis, souring the taste of their inevitable victory. Now on the cusp of achieving absolute power, Reinhard is embattled by his apparent personal failings and the heavy responsibilities of leadership.

Though the civil wars in both the Alliance and the Empire are coming to a close, neither side can ever regain what is lost. Yang Wen-li and Reinhard von Lohengramm each take bitter solace in the knowledge that just on the other side of the galaxy is a worthy opponent—and a true equal. 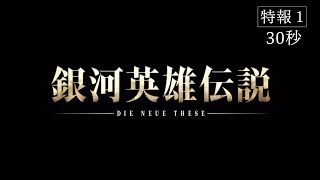