The year is 2050. A young engineer named Derrida Yvain became famous thanks to his contribution to the development of the “Autonomous Machine DZ” at Rebuild, the manufacturing company founded by his father. One day, Derrida and his colleague Nathan discover a flaw in the DZs and try to warn their boss, but are ignored. Although Derrida and Nathan are aware of the danger, they reluctantly decide to put off taking any measures, and instead go to Nathan’s daughter Mage’s birthday party. The next day, after enjoying a peaceful day, Derrida and Nathan are suddenly attacked by unknown forces. At the end of the escape, Derrida falls into a cold sleep machine and 10 years later, he wakes up to a devastated world in the middle of a war. While Derrida is attacked by a group of out of control DZs, he almost gives up, but he recall’s Nathan’s last words. “Take care of Mage.’ Despite the harsh fate that has fallen upon him, Derrida sets off to seek Mage. (Source: ANN)

Episodes 1–4 will be previewed at a screening at Kadokawa Cinema Shinjuku on September 22, 2018. Regular broadcasting will begin on October 4. 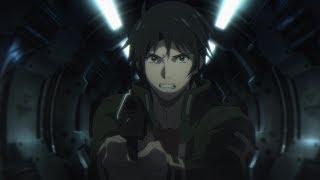