Ranma Saotome is a top-class martial artist and prodigy at the Saotome “Anything-Goes” school of martial arts. While training in China, he and his father meet a terrible fate when they accidentally fall into a cursed spring. Now, Ranma is cursed to turn into a girl when splashed with cold water, and only hot water can turn him back into a boy. Things are only complicated further when Ranma discovers that his father has arranged for him to marry one of Soun Tendo’s three daughters in order to secure the future of the Tendo dojo. Though Soun learns of Ranma’s predicament, he is still determined to go ahead with the engagement, and chooses his youngest daughter Akane, who happens to be a skilled martial artist herself and is notorious for hating men. Ranma ½ follows the hilarious adventures of Ranma and Akane as they encounter various opponents, meet new love interests, and find different ways to make each other angry, all while their engagement hangs over their head. [Written by MAL Rewrite] 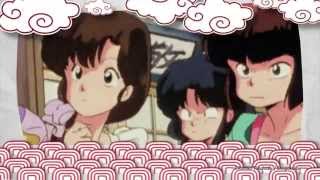