After a scooter accident provoked by a mysterious woman’s vision, Angelino, a deadbeat like thousands of others in Dark Meat City, starts getting violent migraines that are accompanied by strange hallucinations. Along with his good buddy Vinz, he tries to figure out what’s happening to him while threatening men in black seem determined to catch him. (Source: Annecy)

No subs so watch eng dubbed. I left the french audio in case someone needs it in the future. Its a french-japanese anime 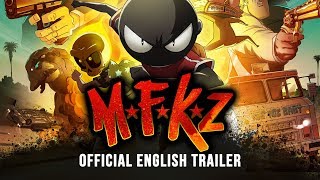