​Shiki Ryougi, Mikiya Kokutou, and Touko Aozaki begin investigating a bomber after they witness a nearby explosion. That same night, Shiki catches a glimpse of the bomber, and as a result, he becomes fixated on her. To get rid of her, the madman plays a game of cat and mouse in attempts to lure her to an empty parking garage. And bombs are not the only thing he has in his arsenal: he also possesses the ability to see the future, and he intends to bring an end to Shiki. Elsewhere a few days prior, a student at Reien Girls’ Academy, Shizune Seo, plans to head home for the summer. However, while exiting a bus, she has a vision of the future involving a nearby stranger’s death. While trying to warn the stranger, she meets Mikiya—who succeeds in utilizing Shizune’s information effectively. Subsequently, an employee is sent on a job with his employer’s 10-year-old daughter in tow. However, the subject of his investigation turns out to be a ghost from both of their pasts. Mirai Fukuin tells the stories set during the main timeline of the Kara no Kyoukai films, as well as one set in the future. [Written by MAL Rewrite] 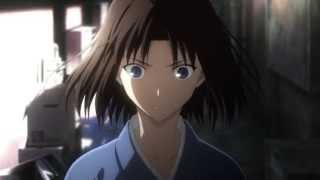