Ever since she was young, Haruka Haruno has always aspired to become a princess. Despite being mocked for this seemingly childish wish, Haruka perseveres to make her dream a reality, ultimately culminating in her acceptance into the prestigious Noble Academy—the birthplace of people’s fantasies. When Haruka arrives at her new school, a chance encounter with a pair of magical creatures influences a series of unbelievable events, and Haruka awakens as “Cure Flora,” the princess of blooming flowers. After two of Haruka’s classmates also transform into legendary princesses, a story of self-discovery unfolds as the newfound team “Princess Precure” carries the responsibility of protecting everyone’s dreams. Engaged in a battle between hope and despair, Haruka may find the key toward becoming the princess she has always dreamed to be. [Written by MAL Rewrite] 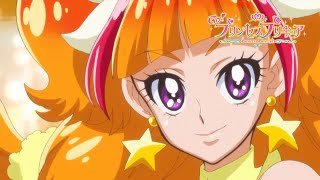